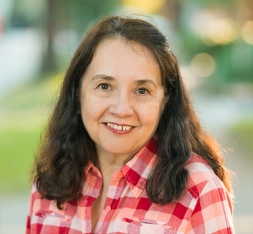 Juliana Thomas, a biologist and educator has been teaching for more than 30 years. She currently team-teaches at The Exploris School (Raleigh, NC), through an integrated curriculum approach and teacher designed “Expeditions”. Juliana’s passion is science and getting students involved in “real science” at a young age. Therefore she has been collaborating with the NC Wildlife Resources Commission for more than 10 years, as her students track Eastern Box turtles and collect data they then analyze to draw conclusions. Juliana became a Kenan Fellow in 2014, and was part of the first “Students Discover” cohort at the NC Museum of Natural Sciences. Within this group she collaborated with two other teachers from Wake County and Alamance County, with the guidance of paleontologist Dr. Terry “Bucky” Gates from NCSU and the NCMNS, in designing Citizen Science lessons for middle school students about the citizen science project Shark Teeth Forensics Case Studies. Through these lessons students become real scientists, collecting shark teeth from the Miocene and Pliocene, measuring them, and then analyzing the data collected as they create frequency graphs. Juliana also has led a middle school Fossil Club-After School citizen science program for four years now, and is currently coaching the Citizen Science After School programs in Wake County- North Garner Middle, and East Wake Middle.